September 19, 2017– Vancouver, BC – Japan Gold Corp. (TSX-V: JG) (OTCQB: JGLDF) (“Japan Gold” or the “Company”) is pleased to announce that it has expanded its epithermal gold exploration portfolio in Japan with the addition of three new projects in the highly prospective Kitami Metallogenic Province of north Hokkaido. The Onne, Fujimi and Harutomi Projects cover historic gold-silver and mercury mines in a prospective and largely underexplored area south of Japan Gold’s Ikutahara Project.

The three projects comprising 21 applications (6,871 hectares collectively), have been accepted by the Ministry of Economy, Trade and Industry (“METI”). The Company now holds priority over these areas and is now authorized to commence surface exploration on these projects. With the addition of these new projects the Company’s portfolio now comprises 66,477 hectares over 15 separate projects on the three main islands of Japan.

The new projects are located in the southern part of the Monbetsu-Rubeshibe Graben, one of two major graben features that localise mineralisation within the Kitami Metallogenic Province, (refer to the inset in Figure 1). The area is underlain by Miocene-Pliocene age volcano-sedimentary rocks and older Jurassic to Cretaceous meta-sedimentary basement rocks.  The new projects lie along a 40 kilometer long east-northeast trending structural corridor which cuts across the southern part of the Monbetsu-Rubeshibe Graben and hosts more than fifteen historically developed gold-silver and mercury mines and workings, (refer to Figure 1 which shows the new project areas, gold-silver and mercury mines on simplified geology).

Previous studies in this area indicate the gold and mercury mineralisation are genetically related to the same hydrothermal activity1. Mercury in varying concentrations is generally found above quartz-adularia epithermal gold systems and can be used as a pathfinder element in gold exploration; this along with the presence of banded quartz-chalcedony-adularia and bladed vein textures, indicate post mineralization erosion is limited and any underlying gold mineralization may be preserved. Work completed by the Metal Mining Agency of Japan (“MMAJ”) between 1989-91 included drilling beneath the Oketo mercury mine, south of the Onne Project, and successfully intersected narrow-weakly mineralized quartz veining. Japan Gold is looking to further explore the potential link between mercury anomalism and epithermal gold mineralisation in this underexplored district. A similar relationship between mercury and epithermal gold mineralization has been noted in the Sulphur Creek-Knoxville mercury mining districts of California which were mined in the late 19th century2. In the latter part of 1970’s, Homestake Mining Company, recognized the potential mercury/gold epithermal relationship in the Sulphur Creek-Knoxville districts, and subsequently discovered the McLaughlin epithermal deposit by drilling beneath a cinnabar (mercury sulphide) bearing sinter.  The McLaughlin deposit produced 3.5 million ounces of gold3.

Onne Project comprises 9 application blocks for a total of 2,998 hectares and hosts the historic Onne gold-silver and Niko mercury mines. At Onne the epithermal quartz veins are developed along east-northeast to east-west orientated structures. Minor production in the years of 1936 and 1928 reported average gold grades of 5 g/t gold and 15 g/t4 respectively. At the Niko mine, disseminated cinnabar was mined from an acid altered rhyolite intrusion4.

The Fujimi Project comprises 7 application blocks for a total of 2,201 hectares over the historic Fujimi and No.2 Tateushi gold-silver mines and surrounds. At Fujimi, five quartz veins hosted in rhyolite were mined in the 1930’s minor production records noted an average grade of 15 g/t gold and 20 g/t silver5. The No.2 Tateushi mine had exploration development carried out in the late 1930’s, however this work was probably curtailed by the government moratorium and closure of gold mines in Japan in 1942. Notably, the deeper levels of both of these deposits were not explored and no drilling has been completed here. The Fujimi mercury mine is located immediately to the west of the application area and hot springs are also noted in the valley. The active hot springs are also analogous feature to the Sulphur Creek-Knoxville gold-silver-mercury district.

The Harutomi Project, centered around the historic Harutomi mine, consists of 5 application blocks for a total of 1,672 hectares. The Harutomi mineralization is hosted in the Miocene Konomai formation and was discovered in the late 1930’s, development and production were halted by the 1942 moratorium. Small scale production was carried out between 1960 to 1970 with annual production not exceeding 2,400 tons per year with gold grades between 3.6 to 6.0 g/t gold and 92 to 252 g/t silver6. A total of 10 veins were developed with strike lengths up to 500m, the average recorded width of the Shikami No. 5 vein was 2.1 meters with localized outcroppings up to 10 meters wide. A total of 7,810 meters of underground workings were developed by the late 1960’s6, however exploration was limited to the area of known veins, no exploration drilling has been completed to test deeper extensions and for veins not exposed at surface.

Japan Gold will seek to define the limits of the alteration systems around these historically mined vein systems and use surface mapping and geochemistry to target new zones and extensions to previously exploited vein zones for scout drill testing.

John Proust, Chairman and CEO of Japan Gold, commented, “We are pleased to expand our portfolio of gold projects in historically productive gold districts in Japan. These gold districts offer excellent exploration opportunities for potential new discoveries due to their relatively under-explored nature.”

Japan Gold Corp. is a Canadian mineral exploration company focused solely on gold and copper-gold exploration in Japan. The Company has applied for 201 prospecting rights licenses in Japan for a combined area of 66,477 hectares over fifteen separate projects. Thirty-two of the applications have been granted as Prospecting Rights. The applications cover areas with known gold occurrences and a history of mining, and are prospective for both high-grade epithermal gold mineralization and gold-bearing lithocaps, which could indicate the presence of porphyry mineralization. Japan Gold’s leadership team has decades of resource industry and business experience, and the Company has recruited geologists and technical advisors with experience exploring and operating in Japan. More information is available at www.japangold.com or by email at This email address is being protected from spambots. You need JavaScript enabled to view it..

Neither the TSX Venture Exchange nor its Regulation Services Provider (as such term is defined in the policies of the TSX Venture Exchange) accepts responsibility for the adequacy or accuracy of this release. The technical information in this news release has been reviewed by Japan Gold’s President & Chief Operating Officer, Dr. Mike Andrews, PhD, FAusIMM, who is a Qualified Person as defined by National Instrument 43-101. 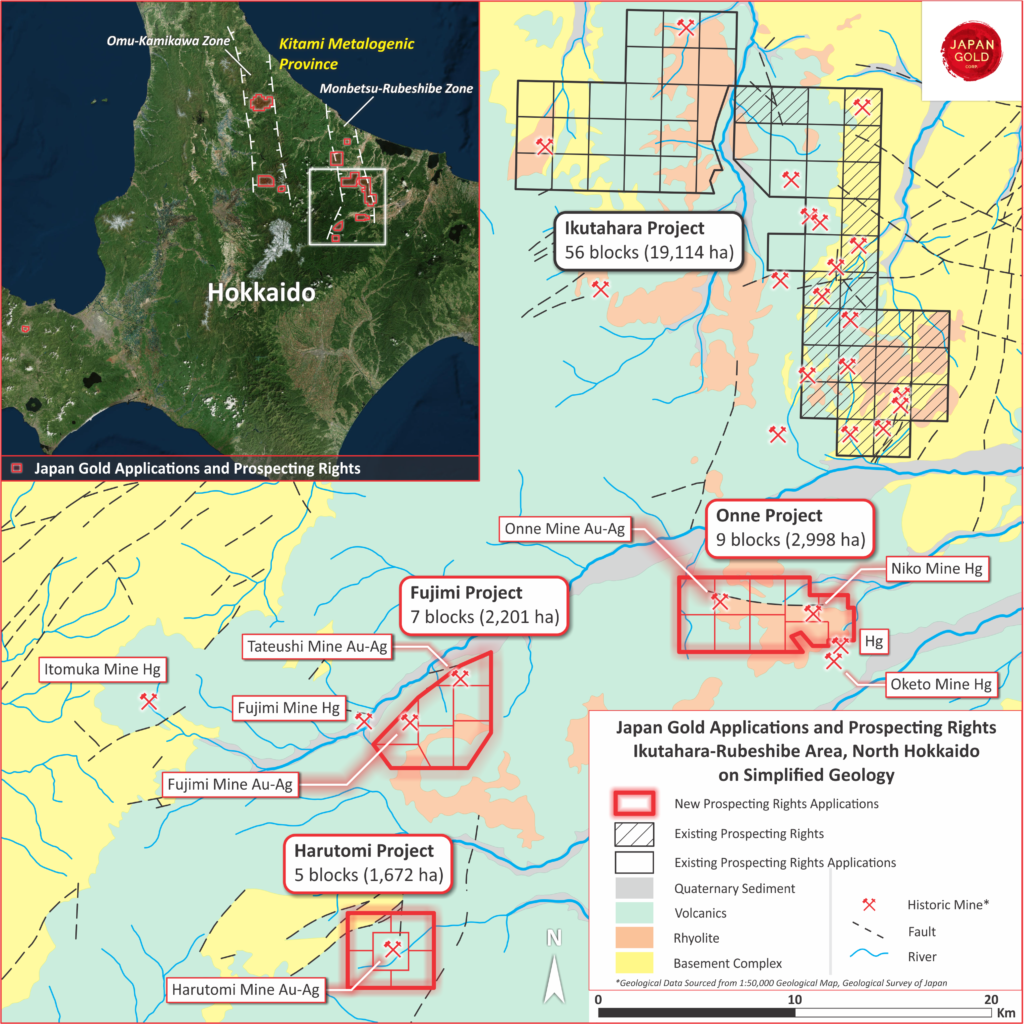