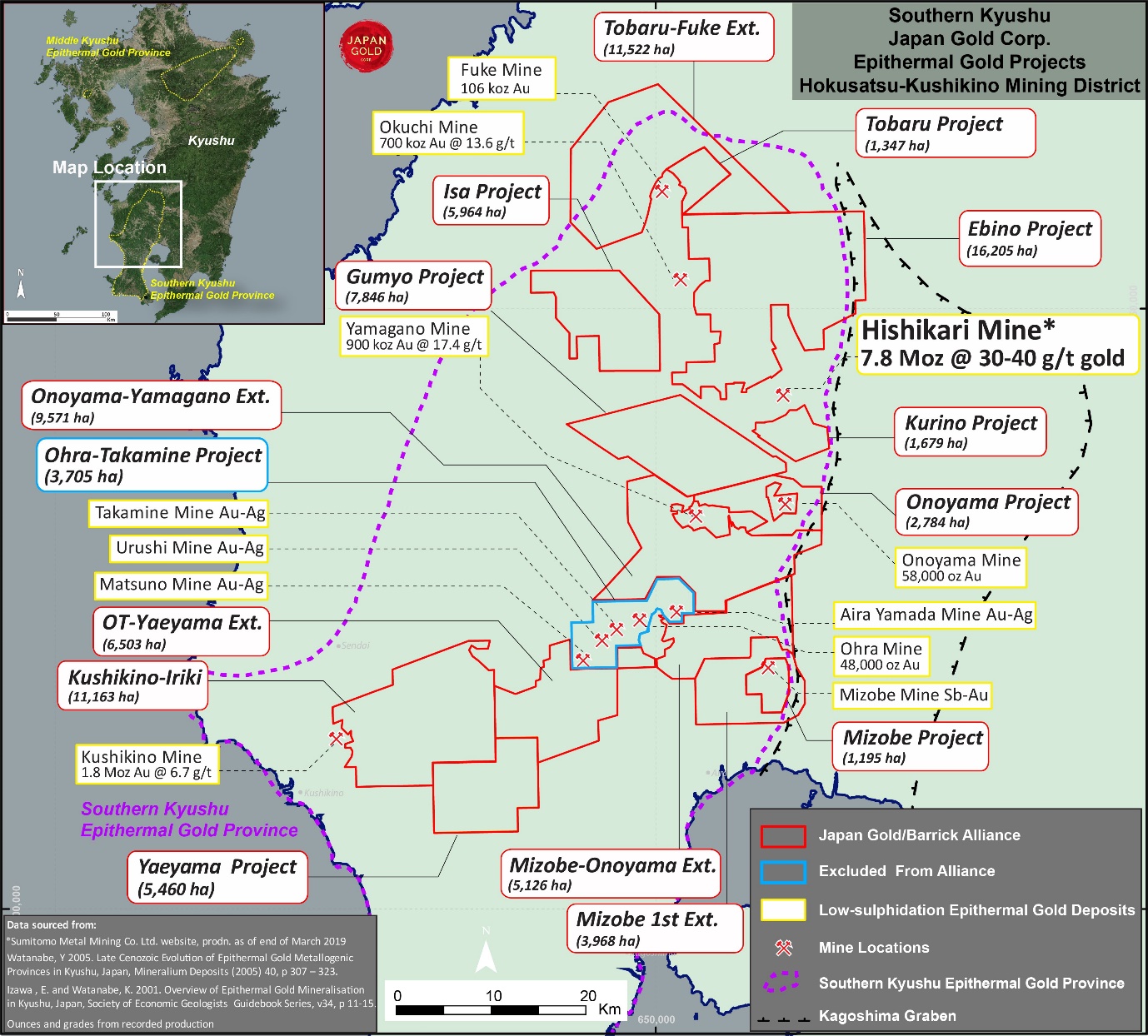 The Takamine-Urushi Project comprises eleven (11) contiguous Prospecting Rights blocks (3,705 Ha) near the coastal town of Kirishima in southern Kuyshu. The project area contains an intact mineralized low- sulfidation epithermal vein system part of which was mined up to 1943. Regional metallogenic surveys and later prospect evaluation work (including some scout diamond drilling) by the Metal Mining Agency of Japan (‘MMAJ’) in the 1980’s has further enhanced the level of geological understanding on this property.

The Takamine and Takamine-Urushi mines were discovered in latter part of the nineteenth century and mined periodically up to 1943. Takamine mine produced 9,654 tonnes of ore with average grades of 5.1g/t gold and 28.3 g/t silver. The vein strikes northeast, has a length of 450 meters, and average width of 1 meter.

Takamine-Urushi mine was estimated to have produced 13,000 ounces of gold between 1896 and 1916. Three northeast striking gold-bearing quartz veins, with lengths up to 350m were mined, the so-called number 2 vein was reported to carry gold grades between 50 to 100 g/t1,2.

The Metal Mining Agency of Japan (MMAJ) (Metal Mining Agency of Japan) conducted regional and more detailed studies over the Ohra-Takamine area between 1982 and 1989, eight drill holes were completed as part of this work. Drill hole 60MAH-2 located to the east of the Takamine-Urushi mine intersected two 10-centimetre wide quartz veins with respective gold grades of 12.3 and 13.3 g/t, 100 meters below the deepest mine workings, and approximately 245 meters vertically below surface3.

Four other historic Au mines (Yamada, Kohwa, Kizushi and Maruyama) are reported from outside the application area, located 1 to 3 km to the east and south-east.

The Hokusatsu andesite is the primary host rock to known gold deposits, reported to be Middle Pleistocene in age (1.8 Ma 4Watanabe, 2005). The formation comprises andesitic to dacitic intrusives and volcanics of the same composition.

Small areas younger post-mineralisation Ito Formation volcanics cover the other units in the southeast of the project.

The seven Au mine deposits found within and in proximity to the Ohra-Takamine property are classified as rift low-sulphidation epithermal. Details of the mineralization at the deposits are described below.

The Takamine-Urushi mine was developed over three northeast (N45° E) striking gold-bearing quartz veins, with lengths up to 350m. The No. 2 vein was reported to carry gold grades between 50 to 100 g/t. Quartz-calcite-adularia veins were notable for massive zones consisting of black bands and transparent quartz. Native gold, pyrite, chalcopyrite and sphalerite are recorded. Fluid inclusions temperatures of 213 to 227 degrees have been reported (6METI, 2000).

Takamine mine vein strikes northeast, has a length of 450 meters, average width of 1 metre and was exploited over a vertical height of 120m (METI, 1989). Veins are composed of quartz with lesser amounts of calcite, carrying native-gold, pyrite, galena and manganese-bearing minerals. Fluid inclusion temperatures of 233 to 252 degrees are recorded (6METI, 2000).

The Company to date has conducted literature reviews and data compilation along with its own geological mapping and sampling campaigns. Recent prospect evaluation work in Q1 2020 has comprised: 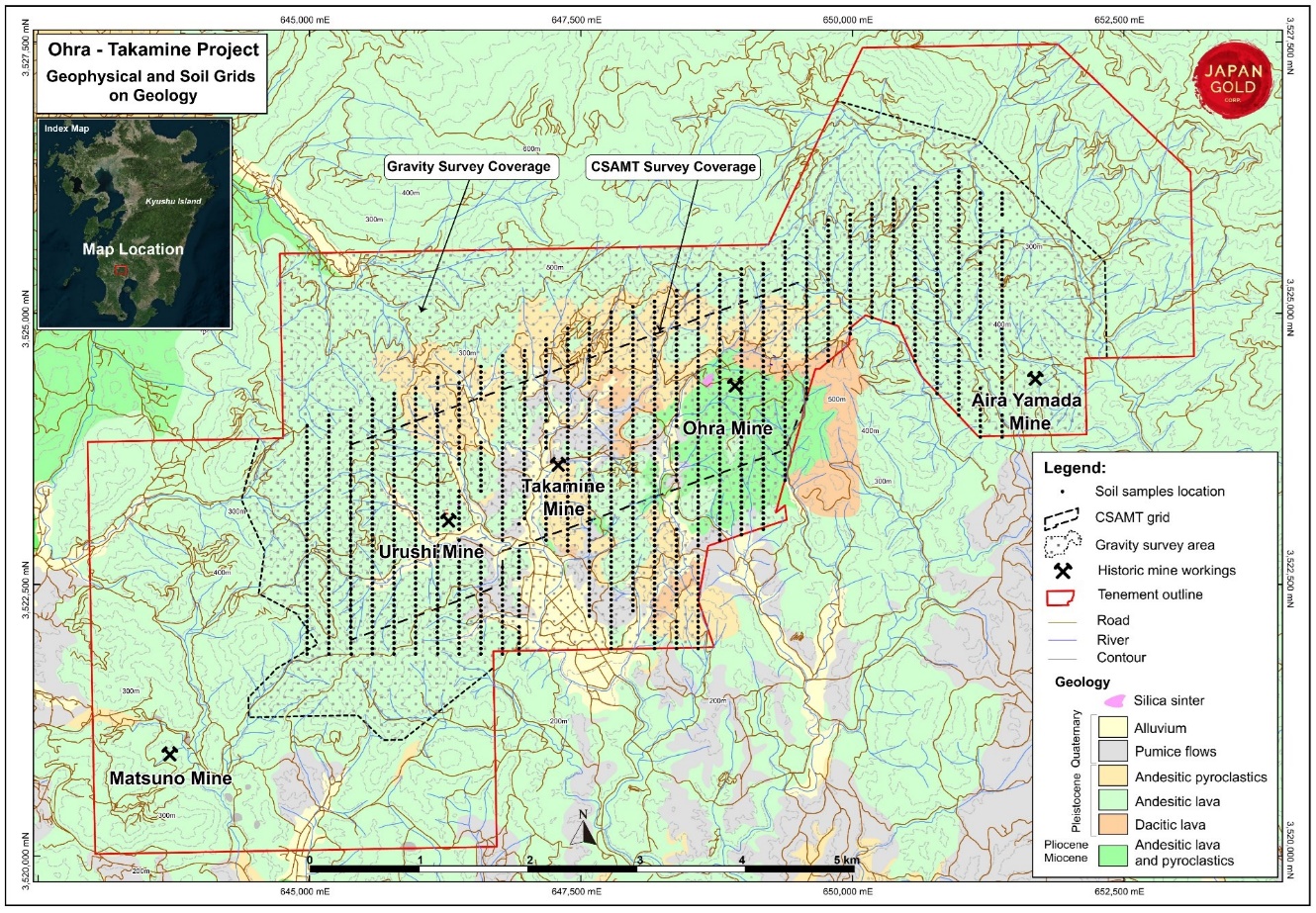 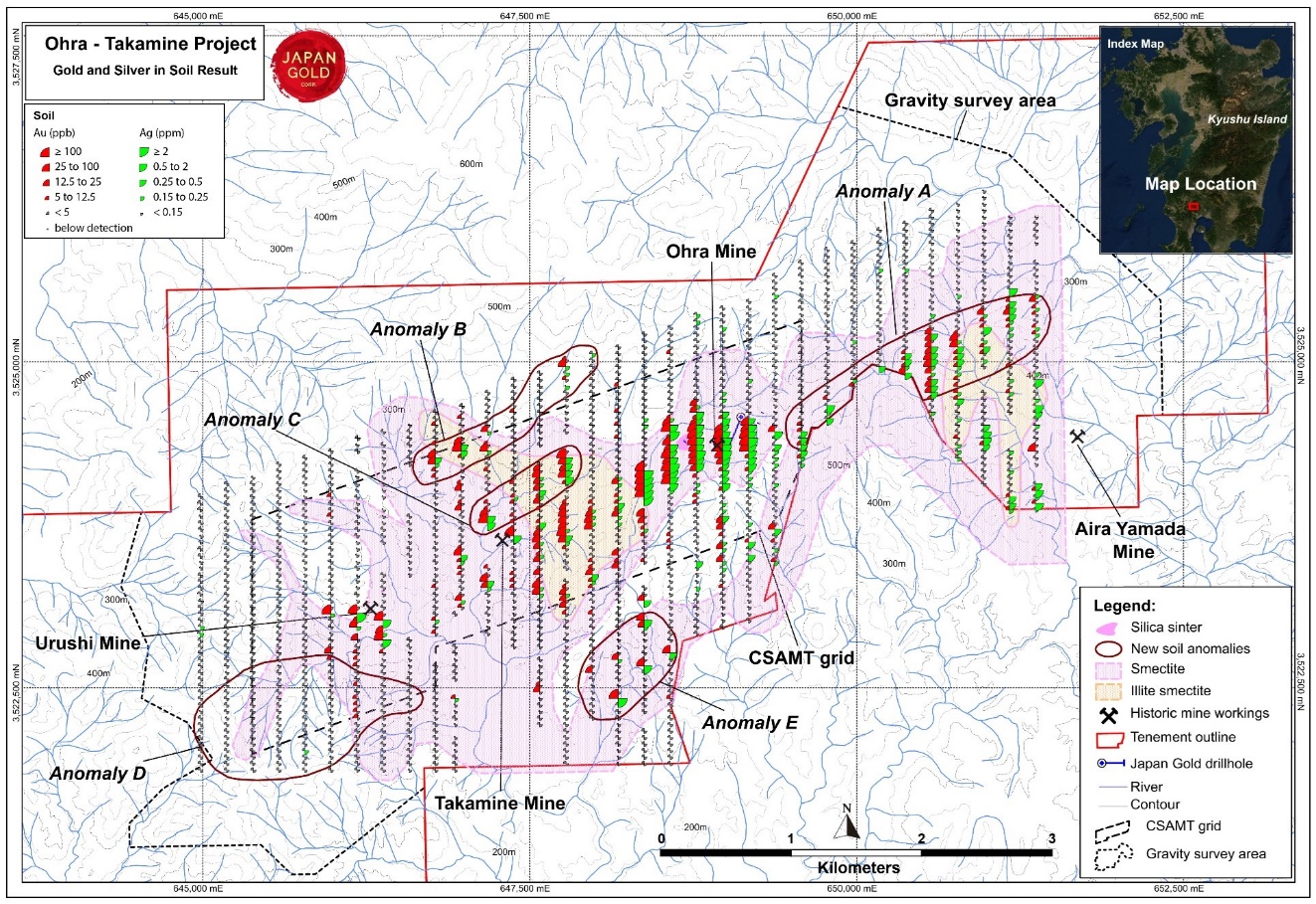 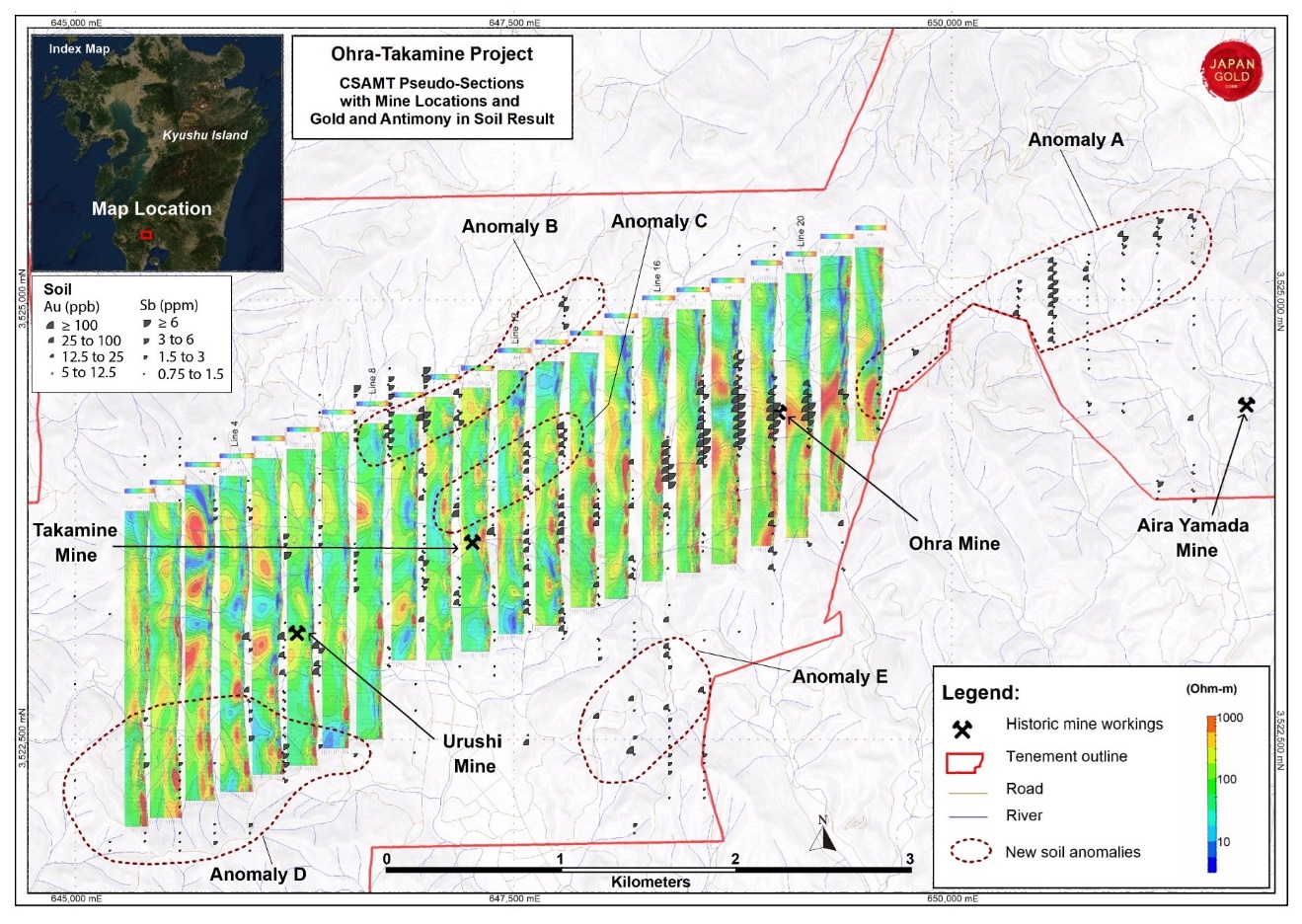 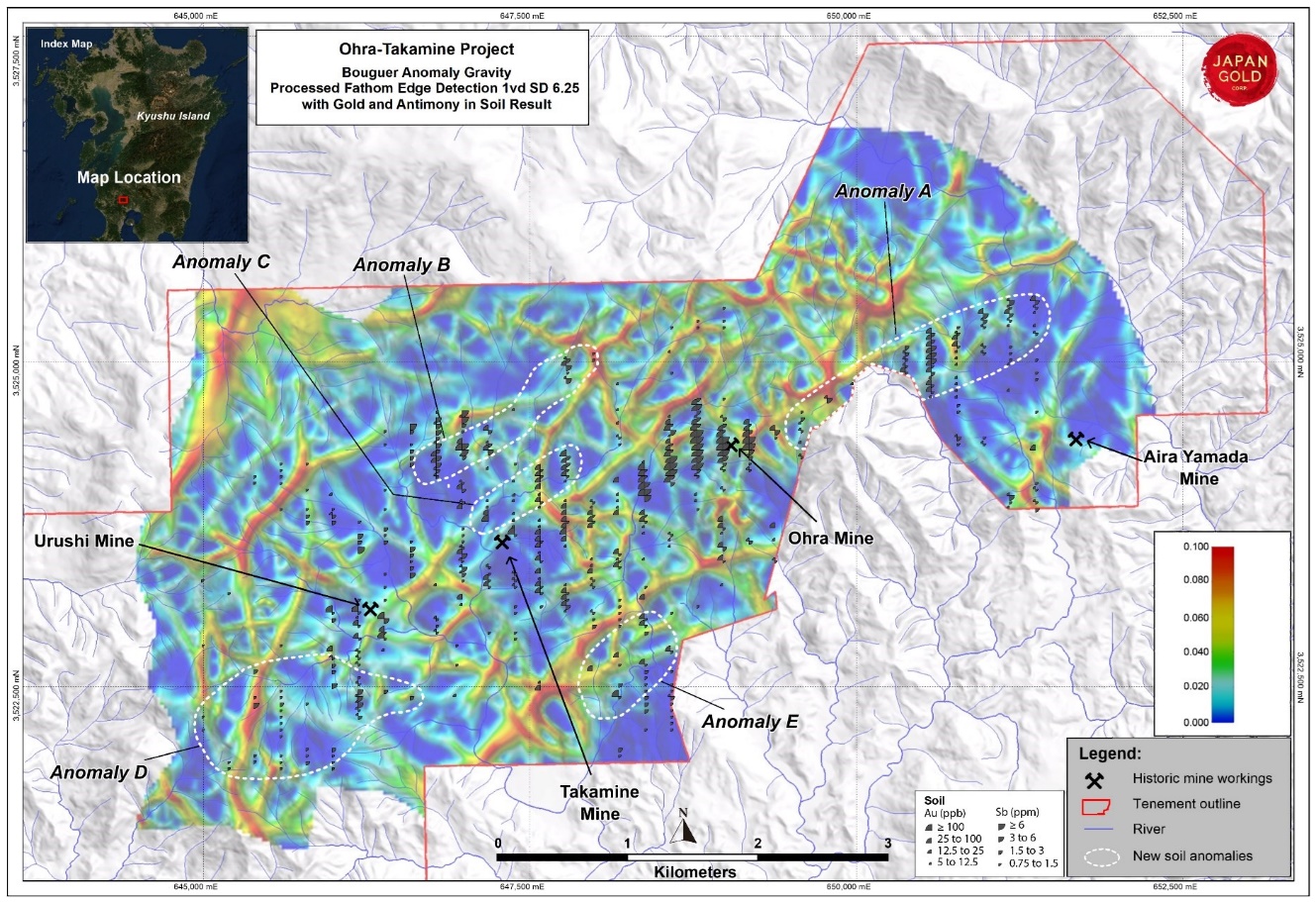 Only one single (OTD001) and one incomplete (OTD002) Phase 1 scout drillholes totaling 489.3m were completed in Q3 2019, before a management decision was taken to suspend drill operations and move drill crews to Ikutahara in order to complete the 2019 Kitano-o drill campaign before the onset of winter conditions.

Coincident northeast trending gold soil anomalies with other pathfinder elements have been identified overlying contiguous linear zones of high CSAMT resistivity at the Ohra-Takamine Project. Japan Gold is targeting its forthcoming drilling program based on integration of these geochemical, geophysical and geological datasets. Drilling will target defined extensions and parallel vein shoots below and along strike of shallowly developed mine workings and also further along the alteration corridor.

The Ohra-Takamine project is located within the highly gold endowed Hokusatsu-Kushikino mining district, in the northern part of the Southern Kyushu Epithermal Gold Province. In excess of 10 million ounces of gold has been produced from high grade epithermal deposits of the district. Notable gold producers within the district include: the Hishikari mine with 7.6 million ounces produced to date at average grades of 30-40 g/t7; Kushikino mine, 1.8 million ounces at 6.7 g/t; Yamagano mine, 910,000 ounces at 17.4 g/t; and the Ohkuchi mine with 714,000 ounces at 13.6 g/t4,8.

Due to the high prospectivity of the district, known auriferous low sulfidation epithermal vein mineralization both within and peripheral to the property and basically intact fossil geothermal systems, the company believes this area is worthy of more detailed exploration. Based on recent prospect evaluation success with the definition of inferred new target zones and extensions to known veins along the Ohra-Takamine-Urushi mine corridor the Company feels scout drill testing of such targets is warranted.

6 METI, 2000. Report on the regional geological structure survey in the Hokusatsu-Kushikino area in the fiscal year Heisei 11. The Agency of Natural Resources and Energy of MITI.