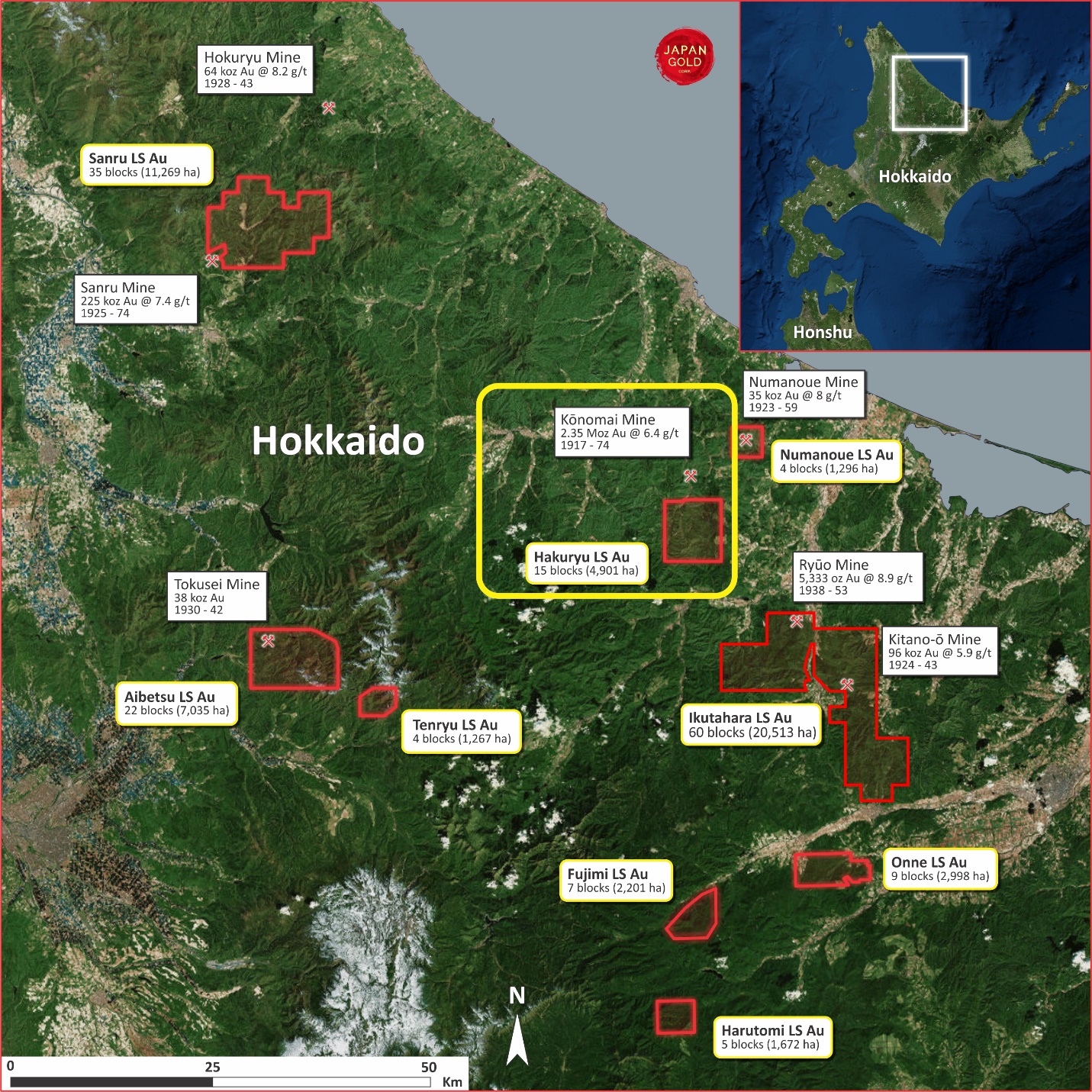 Hakuryu comprises fifteen) contiguous blocks (4,901 hectares) that includes the southern lodes of the large and historic Konomai gold-silver mine, located in the Okhotsk district of northern Hokkaido. The project area is approximately 30 km northwest of Japan Gold’s Ikutahara Project. 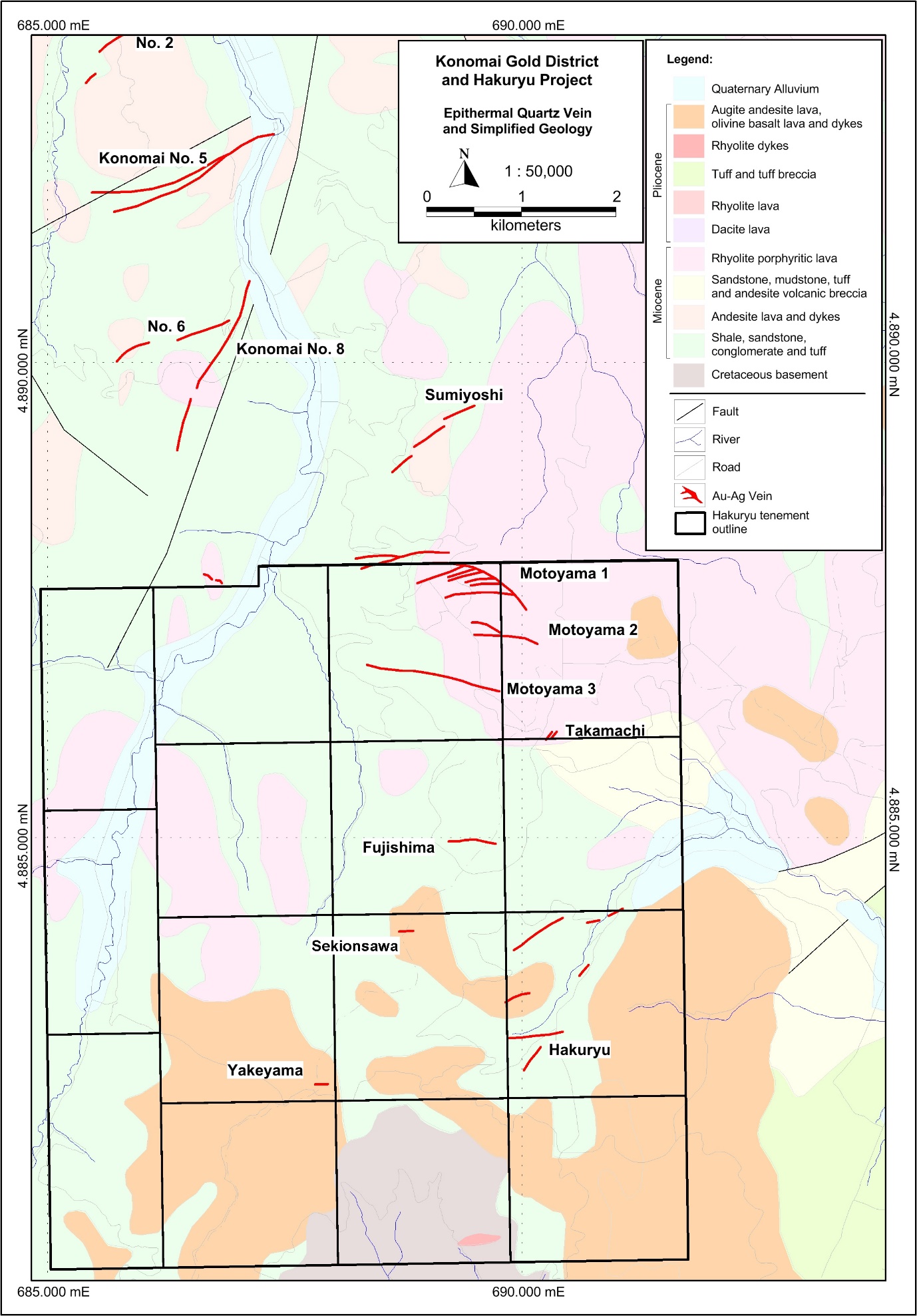 The project lies within the Kitami mining region along the northern portion of the N-S trending Monbetsu-Rubeshibe graben zone, which hosts numerous epithermal mineral occurrences, historical mines and workings dating from the early 1900’s. The most notable mine in the district is the Konomai deposit. From 1915-73, this mine produced a total of 2.35 Moz of gold at an average grade of 6.4 g/t Au and 40 Moz of silver at an average grade 109 g/t Ag1. The southern portion of the Konomai vein system lies within the northeastern part of the Hakuryu Project. The largest of these lodes are known as the Motoyama and Fujishima veins, which produced more than 770 Koz of gold and 7.6 Moz of silver2. Bonanza gold grades (40 g/t Au) in the form of crustiform- and colloform-banded, quartz-calcite-adularia ± sulfide veins are reported. The small Hakuryu lode, which lies in the southeastern portion of the project, produced about 8,000 tonnes of ore at 4.9 g/t Au and 43 g/t Ag3.

Limited exploration via trenching, drilling and underground exploration drives was conducted by miners in the period between 1915 and 1962. In 1915, the Motoyama Outcrop was discovered, and two years following, Sumitomo Mining Co. acquired the mining rights. In 1919, a processing facility was constructed and formal mining operations commenced. As development progressed, new deposits were discovered one after another, and by 1931, Konomai was the fifth largest operating gold mine in the world, and the largest in Asia.

By August 1949, the mill processed 400 tonnes per day, which increased to 600 t / day in 1951. By June of the same year, Sumitomo was mining the third level in the Sumiyoshi deposit, where an 8 m wide vein averaging 10 g/t Au was discovered. Following this discovery, the processing facility was expanded to more than 800 t / day.

As part of a regional metallogenic study reported in 1990, the MMAJ undertook regional rock and soil sampling over a 15 x 12km area, which partially overlaps and includes the eastern half of Japan Gold’s Hakuryu license area and extends 10 km to the east and 5km to the southeast. Analytical results yielded peak assays of 6.02 g/t Au and 18.9 g/t Ag from 78 rock samples (range: 1 - 6020 ppm Au and 0.01 - 18.9 ppm Ag)4.

Examples of Konomai epithermal Au-Ag ore located in the Konomai Mine Museum (courtesy of Steve Garwin).

The gold-silver veins of the Konomai deposit group cover 16 km (north-south) by 7 km (east-west); the southern 6 km of the strike-length of this vein system lies within the Hakuryu tenement. The Konomai No. 5 vein, about four kilometres north of the tenement, was one of the larger exploited veins. The No. 5 vein is characterized by a strike length of 2.1 km, down-dip extent of 560 m, an average width of 10 m and life of mine average grades of 5.8 g/t Au and 111 g/t Ag. Maximum vein widths reach up to 35 m, where the vein is reportedly the richest2.

Sumitomo documented vein types2 in the Hakuryu Project include: 1) poly-episodic and sheeted fissure veins (Motoyama and Hakuryu); 2) vein stockworks (Fujishima); and 3) hydrothermal breccias and potential sinter (Hakuryu). The vein lodes commonly fill faults that strike northeasterly- to easterly, dip steeply and lie along a northerly trending structural corridor. Bonanza grades (20 to 40 g/t Au) were mined at vein-fault intersections and the intersections of the vein zones with the northerly structural trend.

The Motoyama group of veins are distributed along the northeastern boundary of the project. The main deposit extends about 650 m along a west-northwesterly strike and is continuous for up to 240 m down-dip. The vein array has a sigmoidal pattern in plan, expressed by westerly- and northwesterly-trending vein orientations. A quartz-adularia vein, characterized by an average width of about 3.5 m and a maximum width of 10 m contains 1 to 5 cm-wide ‘ginguro’ bands of dark grey silver sulphides. Ore minerals are mainly electrum and argentite with polybasite, pyrargyrite and pyrite. Minor chalcopyrite, sphalerite and galena are also present. The gold-silver ratios range from 1:4-6, which are the lowest in the Konomai group deposits2.

The Fujishima vein group lies in the central part of the project. The Fujishima vein and associated stockwork zone does not form outcrop and is concealed beneath post-mineral(?) rhyolite lava and tuff. Drilling below silicification and quartz boulder float accumulations led to discovery in 1954. The Fujishima deposit has a different form than the other vein lodes in the district. At Fujishima, a network array of veins is distributed over a 250 m by 200 m zone, with a known down-dip extent of 90 m  . The vein array is partially controlled by gently dipping rhyolitic breccia horizons, which form a favourable brittle host. Westerly-, west-northwesterly- and north-northwesterly-strikes are common, with the richest portions of the deposit are located where these three strike-directions converge towards an east-west orientation  . Gold values in the Fujishima deposit reach 20 to 50 g/t Au locally with bonanza grades controlled by east-west vein-segments developed between N30-40° W- and N60° W-trending shear structures2.

The Company has completed a compilation of published exploration data and historical mining data for the project area. Historical exploration and mining data have been sourced from many entities including Sumitomo, METI, MMAJ and Japanese universities, along with published technical papers by Japanese nationals and/or foreigners.

The Hakuryu Project contains the Motoyama and Fujishima workings that lie in the southern segment of the Konomai gold-silver vein system. These historic mines produced more than 770 Koz of gold and 7.6 Moz of silver2. The great depth extents of ore in the major veins of the Konomai vein system (e.g., 560 m in No. 5 vein) supports the depth potential for bonanza grades in the project area. Some of the Konomai-related vein swarms have only been exploited to shallow levels, and some have yet to be drill-tested. Post-mineral cover sequences exist in the licence block, which may hide portions of the known vein deposits and conceal yet to be discovered lodes.

The exploration potential of the project is high, given the gold-rich character and thickness of the known veins; the presence of lattice-textured quartz (indicative of boiling zones and associated metal deposition); multiple phases of quartz-chalcedony-adularia veins, breccias and stockworks; and the relatively high gold-silver ratios of the Motoyama veins. The common occurrence of bonanza grades (40 g/t Au) from colloform-banded quartz-adularia veins within fault intersections or along easterly- to east-northeasterly-trending tensional structures in the Fujishima and Motoyama mines bode well for future exploration.

Desktop studies by Japan Gold of historical Japanese geological data has highlighted the location of major vein structures located within the Hakuryu Project. Extensions of these mineralized structures both laterally and vertically represent priority targets. Hishikari lode analogies are valid at Hakuryu, which has a similar geological setting that is characterized by near-surface structural domes of competent-brittle basement rocks that are overlain by more ductile, volcanic and volcaniclastic rocks. In addition, the presence of potential sinter and surficial eruption-breccias indicate significant depth potential. Whilst, high-grade fissure veins are deemed priority targets, the potential for sufficient concentrations of stockwork veins (e.g., Fujishima) indicate potential for near-surface, bulk-tonnage targets.