The Company is actively seeking joint venture partners to accelerate exploration on its significant Japan portfolio and is currently updating its website to give details on each of its projects (please refer to www.japangold.com).

Chairman and CEO, John Proust, stated, “We are pleased to embark on an aggressive 2018 exploration program, a large component of which will be drilling to explore for high-grade gold mineralization in and around historic gold mines. These opportunities are particularly unique because of the lack and / or absence of drilling around these historic mines.”

Mr. Proust continued, “With Japan Gold’s first–mover advantage and the large portfolio of projects that we have assembled throughout the country, we feel it is appropriate to engage with interested parties that may be able to collaborate with us to advance this significant portfolio in a comprehensive and timely fashion.”

The Company plans to advance the Hokkaido projects during the summer which will include scout drilling programs at the Ikutahara Project around historic mine workings, and surface exploration on its Hakuryu Project.

Aggressive scout drill programs are planned to advance six high-ranked prospects in the Ikutahara Project in 2018 (refer to Figure 1 for project location). The six prospects include the historic mine areas of Kitano-o, Ikutahara, Showa, Sakinzawa, Ryuo and Saroma (refer to Figure 2 for prospect locations). Detailed surface mapping and sampling programs will run in parallel and seek to develop more targets associated with historic mines in the southern and northwestern parts of the Ikutahara Project.

The Kitano-o, Ikutahara, Showa and Sakinzawa eluvial and hard rock gold workings are located over an approximate 6 by 2.5 km area in the historic Kitano-o gold field.

The Ryuo mine, operated prior to 1943, was developed on five vein zones identified within a 1,000 m by 400 m NE-SW oriented zoned alteration system, which remains open to the southwest. The Metal Mining Agency of Japan (MMAJ) reported data on the Jinja and Shouei veins and shows workings developed on up to six levels to a depth of 75 m below surface. Underground workings of the Jinja veins were re-sampled during the 1950’s and some spectacularly high-grade samples were reported, refer to the Company’s website news release dated February the 9, 2017: News release

The historic Saroma, Chitose and Taiho gold workings are hosted in epithermal sheeted vein zones developed along a 4 km long northeast striking fault system.  The Saroma prospect is composed of at least three subparallel vein sets traceable along a 1.2 km open-ended strike length. Vein thickness varies from few centimeters to approximately 5.0 m thick as observed in the historical workings. Operated during the 1930’s, records show the Saroma mine produced 13,189 tons of ore at an average grade of 9.7 g/t between 1933 to 19392.

Surface exploration programs planned over the Hakuryu Project for 2018 include mapping and geochemical surface sampling to aid in identifying extensions to the previously mined Konomai lodes and identification of alteration and geochemical footprints that may indicate the presence of concealed mineralisation.

Located approximately 30 km northwest of the Ikutahara Project, the Hakuryu Project comprises 4,901 hectares and includes the southern lodes of the large historic Konomai gold-silver mine, (Figure 1). From 1915-73, Konomai produced a total of 2.35 Moz of gold at an average grade of 6.4 g/t Au and 40 Moz of silver at an average grade 109 g/t Ag2. The southern portion of the Konomai vein system lies within the northeastern part of the Hakuryu Project. The largest of these lodes are known as the Motoyama and Fujishima veins, which produced more than 770 Koz of gold and 7.6 Moz of silver3.  Bonanza gold grades (> 40 g/t Au) in crustiform and colloform-banded, quartz-calcite-adularia ± sulfide veins are reported. The Hakuryu lode, which lies in the southeastern portion of the project, produced about 8,000 tonnes of ore at 4.9 g/t Au and 43 g/t Ag4.

As part of a regional metallogenic study reported in 1990, the MMAJ undertook regional rock and soil sampling over a 15 x 12 km area, which partially overlaps and includes the eastern half of Japan Gold’s Hakuryu Project area. Analytical results yielded peak assays of 6.02 g/t Au and 18.9 g/t Ag from 78 rock samples5.

For Kyushu, data compilation is in progress. Initial alteration mapping and geochemical rock sampling at the Kamitsue, Ohra-Takamine and Tobaru Projects will commence in March to define and rank targets for scout drilling, with the aim of having a drill targets ready for December at Kamitsue, the most advanced of the Company’s Kyushu projects.

The Kamitsue Project is located in the Northern Kyushu Epithermal Gold Province covering 4,069 hectares, and is the most advanced of the Kyushu projects (refer to Figure 3). Detailed surface exploration was completed at Kamitsue and reported by the MMAJ in the early 1990’s. The Company plans to initially confirm soil and alteration anomalies reported by the MMAJ and believes it will be able to plan an initial scout drill program to be executed late in 2018 if required permits are received on time. For more information on the Kamitsue Project refer to the Company’s website and news release dated April 26, 2017: News release

The Ohra-Takamine and Tobaru Projects:
The Ohra-Takamine and Tobaru Projects comprise 1,681 and 1,347 hectares respectively and are located in Southern Kyushu Epithermal province (refer to Figure 3).  The Ohra-Takamine Project hosts three historic epithermal gold mines that were mined periodically from the late 19th century until 1943 when the Japanese government imposed gold-mine closures. The MMAJ conducted regional and more detailed studies over the Ohra-Takamine area between 1983 and 1989, six drill holes were completed as part of this work. At Tobaru, the project applications enclose a large area of alteration hosted in andesite-rhyolite volcanics centered on a northeast oriented 1,500 by 700 m zone of silicification and quartz veining which includes pockets of advanced argillic alteration. No historic production is recorded at Tobaru, however, the area lies proximal to the Fuke and Okuchi deposits which produced in excess of 800,000 of gold. For more information on Ohra-Takamine and Tobaru refer to the Company’s website and news release dated October 10, 2017: News release

The technical information in this news release has been reviewed and approved by Japan Gold’s President & Chief Operating Officer, Dr. Mike Andrews, PhD, FAusIMM, who is a Qualified Person as defined by National Instrument 43-101.

Japan Gold Corp. is a Canadian mineral exploration company focused solely on gold and copper-gold exploration in Japan. The Company holds 32 prospecting rights and 178 prospecting rights applications in Japan for a combined area of 69,505 hectares over 17 separate projects. These prospecting rights and applications cover areas with known gold occurrences and a history of mining, and are prospective for both high-grade epithermal gold mineralization and gold-bearing lithocaps, which could indicate the presence of porphyry mineralization. Japan Gold’s leadership team has decades of resource industry and business experience, and the Company has recruited geologists and technical advisors with experience exploring and operating in Japan. More information is available at www.japangold.com or by email at This email address is being protected from spambots. You need JavaScript enabled to view it.. 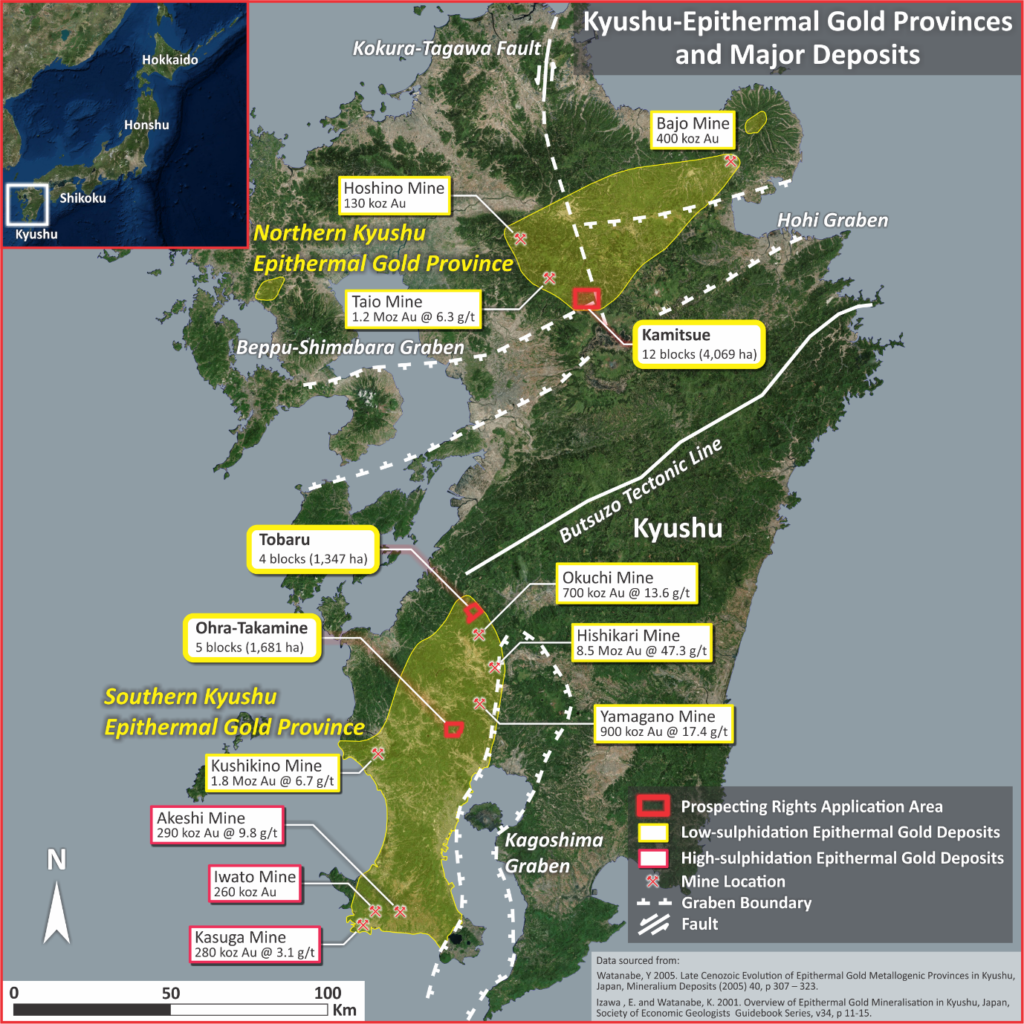 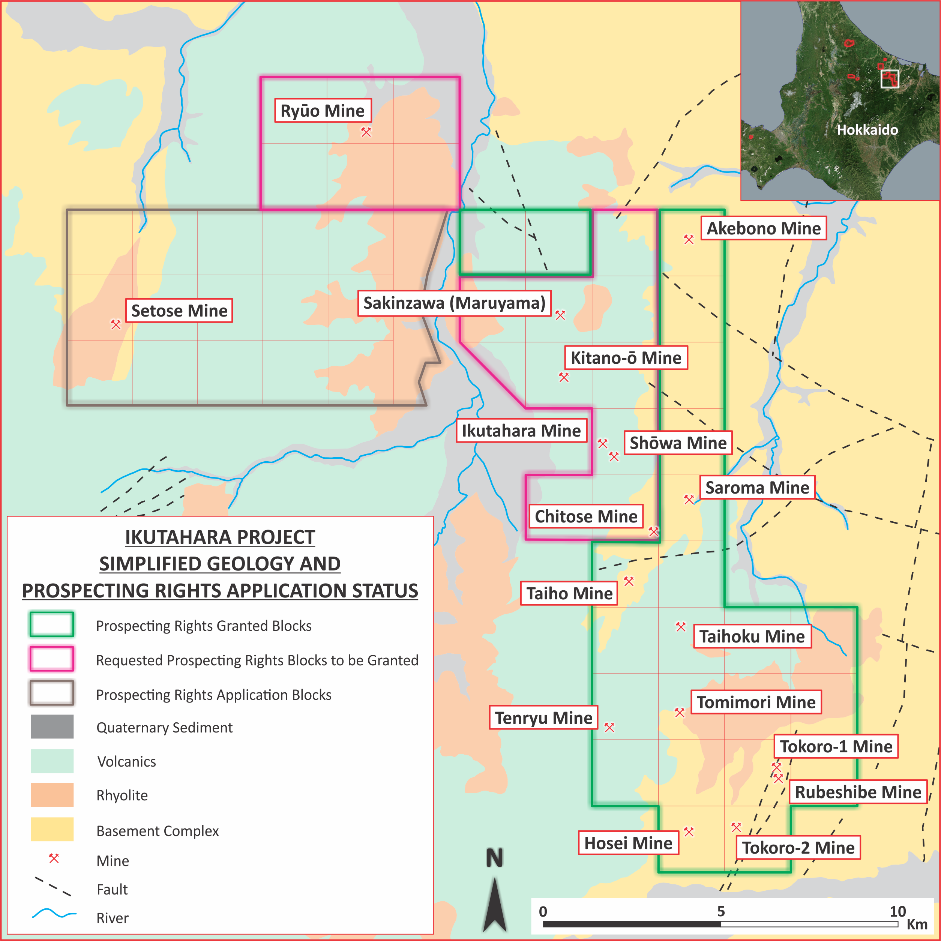 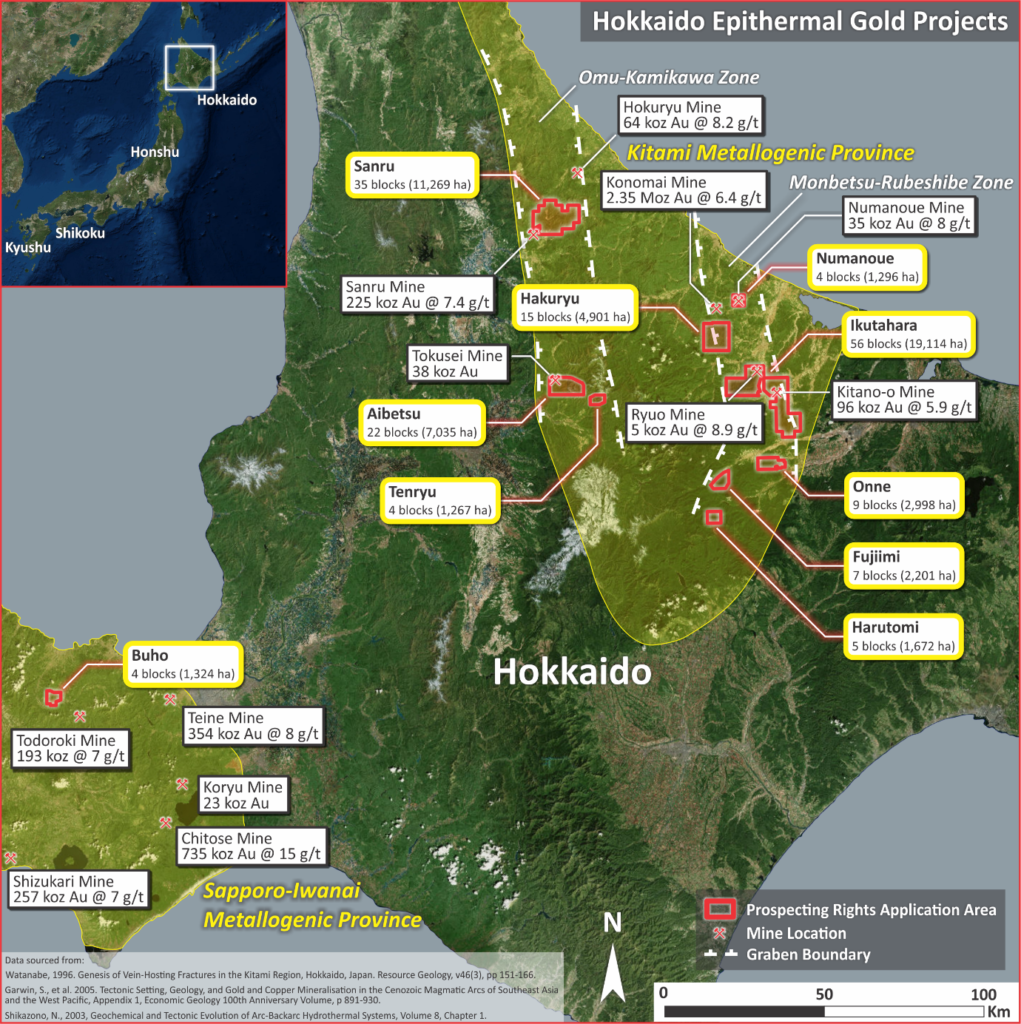