September 12, 2018– Vancouver, BC – Japan Gold Corp. (TSX-V: JG) (OTCQB: JGLDF) (“Japan Gold” or the “Company”) is pleased to announce that its five prospecting rights applications over the Ohra-Takamine Project in the Southern Kyushu Epithermal Gold Province, Japan, have been granted as full Prospecting Rights by the Japanese Ministry of Economy, Trade and Industry (METI).

In excess of 10 million ounces of gold has been produced from high-grade epithermal deposits of this province, refer to Figure 1 which shows the northern portion of the district, project locations and significant mines. Notable producers within the district include: the Hishikari mine with 7.4 million ounces of gold produced to date at average grades of 30-40 g/t Au1; Kushikino mine, 1.8 million ounces at 6.7 g/t Au; Yamagano mine, 910,000 ounces at 17.4 g/t Au; and the Ohkuchi mine with 714,000 ounces at 13.6 g/t Au2,3.

Granting of Prospecting Rights authorizes the Company to commence more advanced exploration methods such as drilling. The Company is in the process of preparing a scout drilling program to test extensions to the historically mined veins and plans to undertake the program in 2019.

The Ohra-Takamine Project covers the historic Ohra, Takamine and Urushi mines which lie along a 3.5 km northeast trending structure, refer to Figure 2 which shows the License area, mine workings, the Metal Mining Agency of Japan (the “MMAJ”) work and simplified geology. The project is located 7.5 km south of the historic Yamagano mine, Figure 1.

Similar to all of the major gold mines in the Hokusatsu-Kushikino mining district, the Ohra-Takamine project is associated with a regional geophysical gravity-high inferred to indicate upward doming of the basement producing suitable fracture networks for fluid flow and quartz vein formation.

Initially discovered in 1885 and mined periodically to 1943, the Ohra mine produced in the order of 27,000 ounces of gold at grades reported to average 11 to 12 g/t Au and 32g/t Ag7. The northeast striking vein system is 1,200 m long, and composed of numerous veins. A single, steeply plunging ore-shoot (the Hon-pi vein) mapped over approximately140 m strike length, was mined over a vertical extent of 100 m from surface and averaged 20g/t Au, this shoot was hosted in a 3.5 to 4.0 m wide section of the vein4. Adjacent to this shoot Japan Gold geologists have located large boulders of parallel laminated chalcedony or sinter, previously not described in reports or literature and indicating the mineralised system is shallowly eroded.

The Takamine and Urushi mines were discovered in latter part of the nineteenth century and mined periodically up to 1943. Takamine produced 9,654 tonnes of ore with average grades of 5.1g/t Au and 28.3 g/t Ag. The vein strikes northeast, for at least 450 m, with an average width of 1 m5,6.

The Urushi mine was estimated to have produced 13,000 ounces of gold between 1896 and 1916. Three northeast striking gold-bearing quartz veins, with lengths up to 350 m were mined. The so-called Number 2 vein was reported to carry gold grades between 50 to 100 g/t Au5,6.

The MMAJ conducted regional and some detailed studies over the Ohra-Takamine area between 1983 and 1989, eight drill holes were completed as part of this work, Figure 2. Drill hole 60MAHT-2 located to the east of the Urushi mine intersected two, 10 cm wide quartz veins with respective gold grades of 12.3 and 13.3 g/t Au, 100 m below the deepest mine workings, and approximately 245 m vertically below surface7. Drill hole 61MAHT-4, drilled directly under the historic Urushi mine, intersected 1.4 m @ 5.8 g/t Au & 5.7 g/t Ag from less than 100 m below the lowest level in the mine (-140 m below surface)7.

Due to the high prospectivity of the district, limited historical production over shallow depth extents, and the limited amount of modern exploration completed on these prospects, Japan Gold believes the area warrants detailed exploration. The Company has conducted a rapid, first pass sampling program and alteration study across the project area. Widespread, high-level alteration mineralogy indicate the mineralised corridor extends under cover between the workings and along strike to the northeast and southwest of the mine workings. The Company is further defining the limits of the alteration around these vein systems and in the process of developing a scout drilling program.

John Proust, Chairman and CEO of Japan Gold, commented, “We are pleased to see the granting of these prospecting licenses in this world class gold district of southern Japan, and consider this another major advancement to the Company’s portfolio. We plan to add Ohra-Takamine to our list of targets for drilling in 2019.”

Japan Gold Corp. is a Canadian mineral exploration company focused solely on gold and copper-gold exploration in Japan. The Company has applied for 210 prospecting rights licenses in Japan for a combined area of 69,505 hectares over seventeen separate projects. Thirty-seven of the applications have been granted as Prospecting Rights. The applications cover areas with known gold occurrences and a history of mining, and are prospective for both high-grade epithermal gold mineralization and gold-bearing lithocaps, which could indicate the presence of porphyry mineralization. Japan Gold’s leadership team has decades of resource industry and business experience, and the Company has recruited geologists and technical advisors with experience exploring and operating in Japan. More information is available at www.japangold.com or by email at This email address is being protected from spambots. You need JavaScript enabled to view it..

Neither the TSX Venture Exchange nor its Regulation Services Provider (as such term is defined in the policies of the TSX Venture Exchange) accepts responsibility for the adequacy or accuracy of this release. The technical information in this news release has been reviewed by Japan Gold’s President & Chief Operating Officer, Dr. Mike Andrews, PhD, FAusIMM, who is a Qualified Person as defined by National Instrument 43-101. As the Qualified Person, he has supervised the preparation and approved the scientific and technical disclosure in the news release. 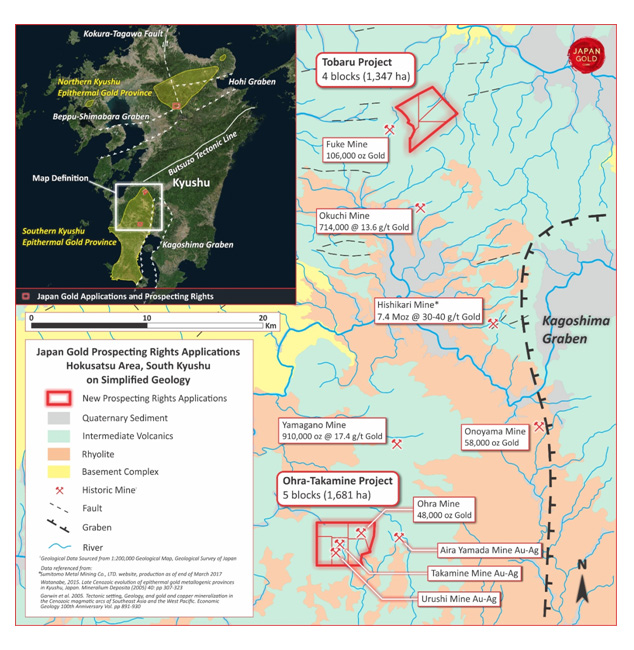 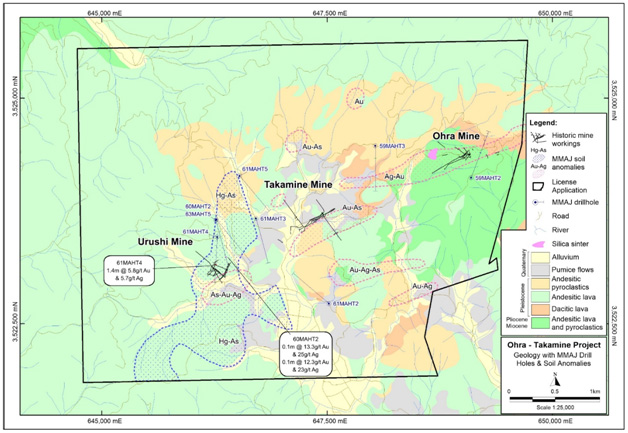