John Proust, Chairman and CEO commented, "The discovery of the Toge and Asada prospects has significantly expanded the Kitano-o Gold District mineralisation further to the north. The acceptance of the four new prospecting rights applications gives us confidence that we have covered all prospective ground in the area".

In 2018, following up on earlier reconnaissance sampling, two new areas of significant quartz veining were identified at the Toge Hill and Asada Ridge prospects, further extending the Kitano-o Gold District to the north. Mapping revealed undocumented historic trenching, pitting and workings on low-temperature / high-level textured epithermal quartz veins hosted in Miocene volcanics. Intermittent exposures of the Toge veins have been mapped over a 2-kilometer long, east-northeast trending series of ridges with individual veins up to 3 meters wide. Several hundred meters north of Toge, the Asada vein has been mapped for 400 meters along a northeast trending ridge.

Both vein zones exhibit gold anomalism with a peak value of 15 g/t gold from a rock-float sample collected below the vein subcrops. Pathfinder elements including silver, arsenic and antimony are anomalous and support the shallow level of exposure of the veins, and the potential for higher-grade gold zones to develop at depth.

This year, more detailed work is planned for the Toge and Asada prospects and will include soil sampling and possibly CSAMT geophysical techniques, if warranted, to further enhance drill targeting.

The Akebono prospect, hosted in Mesozoic basement rocks is located 1 kilometre along strike to the northeast of the Toge and Asada prospects and hosts localised high-grade intervals sampled in underground workings including a 1.2 meter wide vein interval of 446 g/t gold and 376 g/t silver₁. A scout drilling program of three drillholes conducted by Japan Gold late in 2017 returned an encouraging intercept of 0.45 m (true width 0.37 m) @ 29.7 g/t Au and 77 g/t Ag in one of the holes at Akebono (refer to Company's news release dated February 5, 2018).

A 3,000 meter scout drilling program at the Kitano-o Gold Mine Prospect is planned to commence later this month and is designed to target boiling zones in veins beneath the extensive eluvial surface workings.

For more information on the Company's website, visit www.japangold.com

Japan Gold Corp. is a Canadian mineral exploration company focused solely on gold and copper-gold exploration across the three largest islands of Japan: Hokkaido, Honshu and Kyushu. The Company holds a portfolio of 12 Gold Projects which cover areas with known gold occurrences, a history of mining and are prospective for high-grade epithermal gold mineralization. The Company also holds a portfolio of 5 Lithocap Projects which could indicate the presence of porphyry mineralization. Japan Gold's leadership team has decades of resource industry and business experience, and the Company has recruited geologists and technical advisors with experience exploring and operating in Japan. More information is available at www.japangold.com or by email at This email address is being protected from spambots. You need JavaScript enabled to view it..

Neither the TSX Venture Exchange nor its Regulation Services Provider (as such term is defined in the policies of the TSX Venture Exchange) accepts responsibility for the adequacy or accuracy of this release. This news release contains forward-looking statements relating to expected or anticipated future events and anticipated results related to future partnerships and the Company's 2019 gold exploration program. These statements are forward-looking in nature and, as a result, are subject to certain risks and uncertainties that include, but are not limited to, general economic, market and business conditions; competition for qualified staff; the regulatory process and actions; technical issues; new legislation; potential delays or changes in plans; working in a new political jurisdiction; results of exploration; the timing and granting of prospecting rights; the Company's ability to execute and implement future plans, arrange or conclude a joint-venture or partnership; and the occurrence of unexpected events. Actual results achieved may differ from the information provided herein and, consequently, readers are advised not to place undue reliance on forward-looking information. The forward-looking information contained herein speaks only as of the date of this News Release. The Company disclaims any intention or obligation to update or revise forward‐looking information or to explain any material difference between such and subsequent actual events, except as required by applicable law. 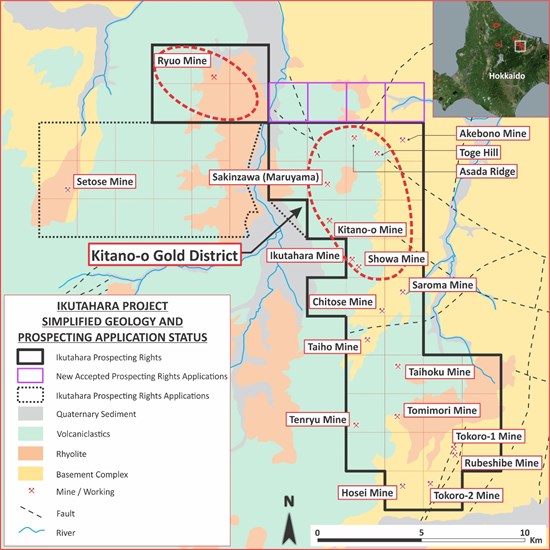 To view the source version of this press release, please visit https://www.newsfilecorp.com/release/46215