Vancouver, British Columbia--(Newsfile Corp. - February 19, 2020) - Japan Gold Corp. (TSXV:JG) (OTCQB: JGLDF) (the "Company") announces results for the 2019 exploration program at the Kitano-o Gold Prospect ("Kitano Prospect"), including assays from six Phase 1 scout diamond drill holes, a controlled source audio-frequency magnetotellurics (CSAMT) geophysical survey, a detailed ground-gravity survey and extensive surface sampling (also see Company news release 7/29/2019). The Kitano-o Prospect, which includes the Kitano Mine, is located within a 7 by 4 kilometre gold district which hosts seven additional gold prospects (Figure 1). The Kitano-o Mine produced more than 96,000 ounces of gold at an average grade of 5.9 g/t Au1 primarily from shallow open-pits along a 3 kilometre alteration corridor, prior to the government-imposed closure in 1943.

The surface geochemistry (Table 1), CSAMT and gravity geophysics collected over the Kitano-o Prospect, along with the Phase 1 drill hole data (Table 2), have refined Japan Gold's understanding of the geology of the Kitano-o hydrothermal system and give strong vectors to the eastern side of the prospect. It is now interpreted that the western part of the Kitano-o Prospect represents the 'lateral outflow' of a large epithermal system, developed at depth in the eastern part of the 3 kilometre long prospect (Figure 2).

Phase 1 drill testing of the western side of the Kitano-o Prospect was completed in late December 2019 with 6 diamond drill holes, totalling 2,837 metres. Drilling targeted depth extensions of the western end of a well-defined vein-corridor exposed within extensive shallow open-pits and geophysical anomalies (Figure 3). Significant zones of quartz veining were intersected corresponding to those mapped at surface, however, the low tenor of gold reported from drill core assays does not adequately reflect the >96,000 ounces of gold mined from the exposed paleosurface sinter deposits in the open pits.

John Proust, Chairman and Chief Executive Officer commented: "The Phase 1 scout drilling at the Kitano-o Prospect has provided us with a clearer understanding of this large epithermal system. In combination with the newly acquired CSAMT and gravity geophysical data, and previously announced high-grade gold and antimony results in surface sampling, we are now focussed on drilling targets in the eastern part of the Kitano-o Prospect to discover the source of the Kitano-o Mine gold."

The eastern side of the Kitano-o Prospect has now been identified as a key target area for Phase 2 drilling. Gold historically mined at surface at the Kitano-o Mine is interpreted to have been deposited at the paleosurface during deposition of a silica-sinter apron through lateral outflow. Silica rich fluids which formed the sinter, also carrying gold, flowed upwards then laterally out from hot spring vents connected to a deep epithermal boiling zone. Rock samples collected in the eastern side of the Kitano-o Prospect show high gold and antimony values potentially indicating higher temperatures of deposition and closer proximity to the 'upflow' or 'boiling zone' where gold was precipitating. Figure 2 represents Japan Gold's current interpreted geological model for the Kitano-o Prospect.

The CSAMT geophysical survey (Figure 4) shows the presence of larger contiguous resistors at depth in the eastern side of the Kitano-o Prospect, underlying and adjacent to historic workings. It is inferred that these anomalies represent silicification and quartz veining at depth. Detailed gravity data collected over the prospect has been processed to highlight rapid changes in gravity gradient, interpreted as off-sets or faults in the underlying basement, and also marking the graben-margin faults (Figure 5). Several east-west oriented basement offsets are co-incident with mapped CSAMT resistive zones, potentially defining the plumbing for a large epithermal system.

Large structural movements required for robust vein development and repeated, focussed fluid flow are more likely to be found on or near major structural intersections. A combination of strong gold and antimony geochemistry at surface with coincident resistive features at depth, close to the graben margin, provide compelling drill targets. The basement unconformity shallows towards the graben-margin faults and provides an excellent structural environment for gold deposition, as is seen at the Hishikari Mine in Kyushu. High-priority drill targets now defined in the eastern part of the Kitano-o Prospect are currently being permitted with the aim of drilling them in the second half 2020.

Surface Sampling Results from the Eastern Side of Kitano-o Prospect

Work to refine drill targets in the eastern part of the Kitano-o Prospect has included detailed geological mapping of the historic workings and the majority of samples taken were sourced from mine dumps and vein sorting areas located around these workings. Samples of quartz vein dump, sub-crop and float material were collected along an 800-metre east-west section. Quartz vein samples show well-developed colloform-crustiform textures containing bands of disseminated fine-grained black sulphide mineralization, termed 'ginguro'.

Of the 75 rock chips collected from east Kitano-o, 16 mine dump samples gave gold assay results greater than ≥2.5 g/t with a peak assay of 60.8 g/t. Noteworthy results include:

Table 1: Selected surface sample results from the east side of the Kitano-o Prospect

Details of the Phase 1 Drilling at West Kitano-o Prospect

The Phase 1 drilling consisted of six inclined drill holes located at the western side of the 3 kilometre long Kitano-o Prospect, on approximately 300 metre spaced fences, over a 750 metre strike length. The shallowly inclined holes targeted extensions of a well-defined vein system below extensive shallow open-pits, and geophysical anomalies.

Drill intersections include the following intervals:

Drilling at the western end of the Kitano-o Prospect confirmed the presence of a large, up to 200 metre thick rhyolite flow-dome complex high in the stratigraphy. The flow-dome is coherent and flow-banded in its core, with complex brecciated margins. The rhyolite dome thickens to the east and north towards the outcropping Maruyama dome, a prominent circular hill located NE of the drilled area. A sedimentary marker horizon underlying the rhyolite has been intersected at a similar elevation in all drill holes.

The upper brecciated margin of the rhyolite flow-dome and thin veneer of overlying breccia and volcanic sediments, host an up to 100 metre thick zone of horizontal, water-table controlled silicification which was intersected immediately below the sinter in all drill holes. CSAMT has also mapped this horizontal-tabular silicified zone at western end of the Kitano-o Prospect. Like the dome itself, this alteration zone thins to the west and south, and appears to map outflow of the hydrothermal system in these directions. The bulk of the mineralised structures intersected in the drill holes occur within this rigid body of silica alteration.

Drill hole KTD001, inclined at 50º to the south-southwest (200º) tested the down-dip extension of a vein zone mined from surface within a large, shallow, open-pit originally excavated on gold-bearing eluvium, located in the central west of the Kitano-o Prospect (refer to Figure 2 for drill hole locations). Quartz veins and multiple phases of stockwork quartz veinlets and hydrothermal brecciation were intersected between 115 and 160 metres down hole, or 85 to 125 metres below surface. Individual veins up to 1.05 metres (down-hole intervals) were intersected. A one metre interval of stockwork veining returned a peak assay of 1.2g/t gold and 1.25g/t silver from 109.60 metres down hole. The vein zone was consistently anomalous in arsenic and antimony (pathfinder) geochemistry.

Drill hole KTD004, drilled to the north (000º) inclined at 40º from the same pad as KTD001, targeted coincident CSAMT and gravity anomalies located below, and north of surficial gold workings. An extensive network of stockwork veins were intersected between 70 and 145 metres down hole, or 60 to 95 metres below surface. A 3.27 metre zone of stockwork vein and hydrothermal breccia-hosted mineralisation intersected from 85.83 metres down hole assayed 1.1g/t gold and 1.2g/t silver.

Drill hole KTD003, inclined at 40º to the north-northeast and collared 350 to 400 metres west of section KTD001-004-006 and 300 metres east of section KTD002-005, targeted the down-dip extension of structures mined from surface between the western and central Kitano-o Mine open-pits. Numerous, 10's of centimetre wide, banded crystalline quartz veins and surrounding stockwork veinlets intersected between 29 and 47 metres down hole in hole KTD003 returned a low tenor of precious metal mineralisation, with a peak assay of 35cm @ 1.47g/t gold and 1.7g/t silver from an oxidised quartz-sulphide vein zone.

Hole KTD002, inclined at 45º to the north-northwest (340º), targeted the down-dip extension of veins inferred to have been mined from surface in a second series of adits located to the south of the workings targeted in hole KTD005. This hole intersected near surface silicification but no significant precious metal results.

Hole KTD005, inclined at 42.5º to the north (355º), targeted the down-dip extension of mineralised structures historically mined from surface along multiple, sub-parallel adits developed down the western side of the Kitano-o Mine. A composite vein zone intersected in hole KTD005 between 72.2 and 75.6 metres down hole comprising multiple phases of crystalline quartz veining gave a peak assay of 0.35 metre @ 0.92g/t gold and 7.4g/t silver. Weakly deformed rhyolite cut by millimetre scale oxidised, quartz-sulphide stockwork veinlets between 99.35 and 101.5 metres downhole assayed 2.15 metres @ 1.0g/t gold and 1.6g/t silver and 20cm @ 6.2g/t gold and 5.1g/t silver.

The drilling results discussed in this news release are from drill core samples obtained by PQ, HQ and NQ-size triple-tube diamond core drilling using a PMC700 and PMC400 man-portable drill rigs owned and operated by the Company. The drilling program was fully supervised by Company senior geologists at the drilling site.

Drill core was collected in plastic core-trays at the drill site and transported by road in Company vehicles to its core shed storage facility in Ikutahara Township, located next to the project area. The drill core was carefully logged, photographed and sample intervals marked-up along predicted mineralized and selected unmineralized intervals by Japan Gold KK senior project geologists.

Sample lengths varied from 0.2 to 1.0 m; depending on the positions of geological contacts and variations in vein texture and composition. The core was split by diamond rock saw by project geologists. Half-core sample was collected from the entire length of each designated sample interval and placed into individual-labelled, self-sealing calico bags for secure packaging and transport to the laboratory. The half-core samples weighed between 1 to 8 kg depending on the sample length and core size. A Chain-of-Custody was established between the Company and receiving laboratory to ensure the integrity of the samples during transportation from site to the lab. The samples were sent in batches to Intertek Testing Services (Manila) for sample preparation and assaying.

Certified Reference Materials (CRMs) were inserted by Japan Gold KK at every 20th sample to assess repeatability and assaying precision of the laboratory. In addition, the laboratory applied its own internal Quality Control procedure that includes sample duplicates, blanks & geochemical standards. They report these results with the certified Assay Report. Laboratory procedures and QAQC protocols adopted are considered appropriate. The CRMs and internal QC-QA results fall within acceptable levels of accuracy & precision and are considered to lack any bias. External assay checks from 214 of the core samples in this drill program, including both sample residue and coarse reject splits were sent to ALS Global in Vancouver to test for repeatability of the Intertek results. All results fell within acceptable repeatability ranges.

Japan Gold Corp. is a Canadian mineral exploration company focused solely on gold exploration across the three largest islands of Japan: Hokkaido, Honshu and Kyushu. The Company holds a portfolio of 24 Gold Projects which cover areas with known gold occurrences, a history of mining and are prospective for high-grade epithermal gold mineralization. Japan Gold's leadership team represent decades of resource industry and business experience, and the Company has a strong operational team consisting of geologists, drillers and technical advisors with experience exploring and operating in Japan. More information is available at www.japangold.com or by email at This email address is being protected from spambots. You need JavaScript enabled to view it..

John Proust
Chairman & CEO
Phone: +1 778 725-1491
Email: This email address is being protected from spambots. You need JavaScript enabled to view it. 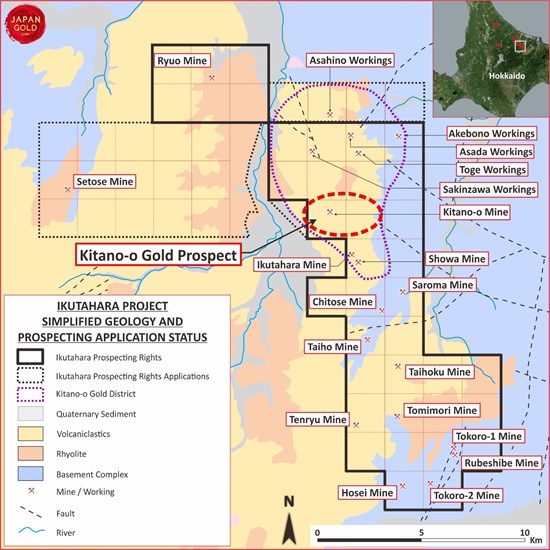 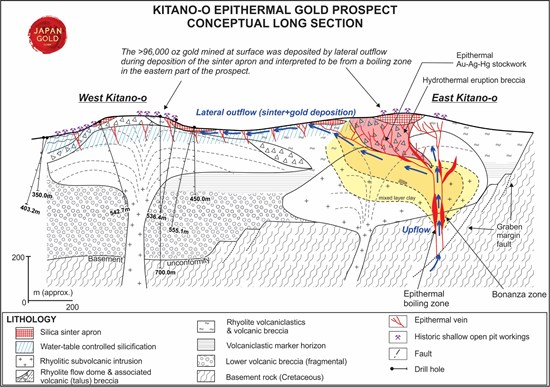 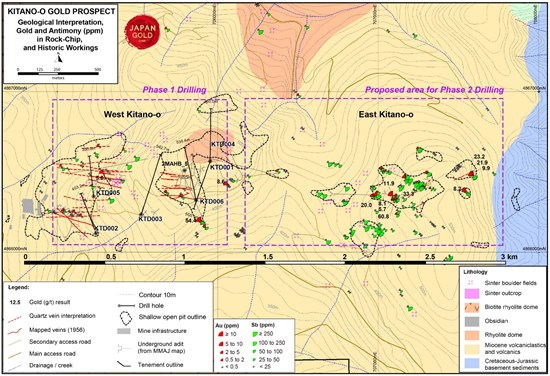 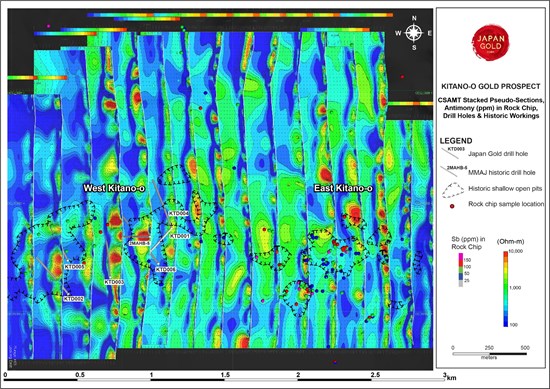 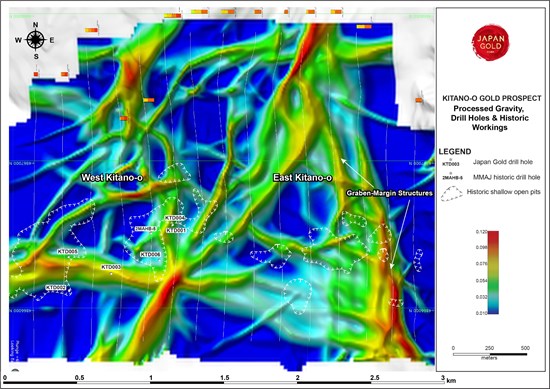 To view the source version of this press release, please visit https://www.newsfilecorp.com/release/52564