The six new applications total 2,024 hectares and add to the existing area of granted prospecting rights, (1,681 hectares) at the Ohra-Takamine Project. The project covers historic gold-silver mines in the highly gold endowed Hokusatsu-Kushikino mining district, in the Southern Kyushu Epithermal Gold Province. Refer to Figure 1 which shows the Companies projects in relation to the other major mines in the district.

In excess of 10 million ounces of gold has been produced from high-grade epithermal deposits in this province, refer to Figure 1 which shows the northern portion of the district, project locations and significant mines. Notable producers within the district include: the Hishikari mine with 7.4 million ounces of gold produced to date at average grades of 30-40 g/t Au1; Kushikino mine, 1.8 million ounces at 6.7 g/t Au; Yamagano mine, 910,000 ounces at 17.4 g/t Au; and the Okuchi mine with 714,000 ounces at 13.6 g/t Au2,3.

John Proust, Chairman and CEO of Japan Gold, commented, "With these new applications the Ohra-Takamine project now covers a prospective 9km long corridor comprising historic mines, and coincident soil anomalism and clay alteration. Proximity to the world class Hishikari mine along with other major historic gold production in the District adds significantly to prospectivity of this project."

During field investigations earlier in 2018, Company geologists noted clay alteration in areas of recessed topography along strike extensions to the Ohra, Takamine and Urushi historic mine corridor. These northeast and southwest extensions are supported by anomalous trace element geochemistry from previous government soil sampling and have limited drill testing. Contiguous applications were submitted to cover these extensions and include the historic Aira-Yamada mine 3 kilometres to the east of the Ohra mine and the historic Matsuno mine 4 kilometres to the southwest of the Urushi mine. Refer to Figure 2 which shows historic mine locations, MMAJ drill holes and soil sample results on simplified geology. The Matsuno mine is reported to have produced nearly 1.5 million tons of ore at average grades of 7 g/t gold and 26 g/t silver between 1936-404.The Company is in the process of preparing a scout drilling program to test extensions to the historically mined veins and plans to undertake the program in 2019, (refer to the Company's news release dated September the 12th, 2018) (https://japangold.com/index.php/news/2018/337-japan-gold-granted-prospecting-rights-at-its-ohra-takamine-project-in-the-southern-kyushu-epithermal-gold-province-japan).

Japan Gold Corp. is a Canadian mineral exploration company focused solely on gold and copper-gold exploration in Japan. The Company has applied for 216 prospecting rights licenses in Japan for a combined area of 71,529 hectares over seventeen separate projects. Forty-one of these applications have been granted as Prospecting Rights. The applications cover areas with known gold occurrences and a history of mining, and are prospective for both high-grade epithermal gold mineralization and gold-bearing lithocaps, which could indicate the presence of porphyry mineralization. Japan Gold's leadership team has decades of resource industry and business experience, and the Company has recruited geologists and technical advisors with experience exploring and operating in Japan. More information is available at www.japangold.com or by email at This email address is being protected from spambots. You need JavaScript enabled to view it..

Neither the TSX Venture Exchange nor its Regulation Services Provider (as such term is defined in the policies of the TSX Venture Exchange) accepts responsibility for the adequacy or accuracy of this release. The technical information in this news release has been reviewed by Japan Gold's President & Chief Operating Officer, Dr. Mike Andrews, PhD, FAusIMM, who is a Qualified Person as defined by National Instrument 43-101. As the Qualified Person, he has supervised the preparation and approved the scientific and technical disclosure in the news release. 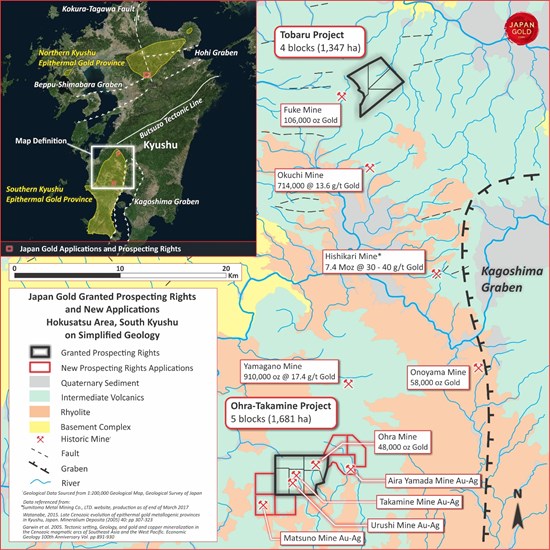 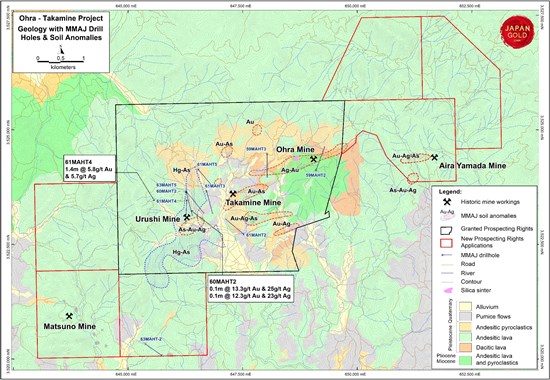